Just a lump of carbon

Talking of Aileen (see previous post) she just cannot believe the money that was paid for this: 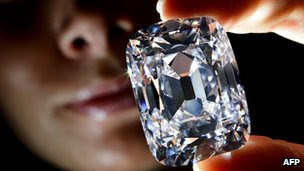 'The massive extended tetrahedral arrangement of all the atoms held in place by the bonding electrons,' I explained.

'Electrons?' she asked, clearly puzzled. 'You still believe in electrons?'

'Oh deary, deary me,' she said, through her translator ring of course, while shaking her little green head.

She is tiny, but sometimes she makes me feel so small.
Posted by Andrew MacLaren-Scott at 01:23