There is a lot of depression about. Not just feeling down, but full-blown malignant clinical depression. It's all over the place, and probably inside more of those around us, at least some of the time, than we may realise. That thought is prompted by a recent conversation with a young woman who requested some help from me, or guidance, and I hope I was able to give her some. And it is also prompted by thoughts of some of the bloggers I visit or have visited, because depression seems quite a common trait in the blogging community, or perhaps it is just that people are more inclined to talk about it on their blogs. And over the years I have had my own problems with the dark swamp of depression, or the black clouds, the black dog... whatever metaphor one wishes to use. The modern prevalence of the problem is perhaps a consequence of the steady erosion of faith and the increasing availability of time to think. Not that I would promote faith in things we cannot know about as a cure, even if I can somewhat envy its undoubted effectiveness in those who can sustain it.

I was driven by these thoughts to return to a blog post that I wrote in 2008, and the memory of some words from Joe Joseph, a journalist with The Times who wrote:

In my old blog post I expanded on that myself by writing:

And I also wrote:

The key to happiness for me, these days, is to accept that life is pointless, that we mean nothing and that whether we achieve little or a great deal, or something in-between, it all amounts to nothing in the end, especially when the stars burn out, and are gone. But the point in life can be to try to find some interest, and even fun, in the people and things around us with whom we share this journey on our little planetary carousel spinning on its axis and circling the Sun. And to treat each day as a life and do something we can enjoy, is the best that we can hope for.

And I was thinking of all that today as, once again, a large latte, a newspaper and a comfortable seat in a warm dry place, oh... and a strawberry and cranberry muffin this time, was sufficient to keep me happy and content, and able to plan for a productive evening while wondering why I could not always keep my life and my mind this simple. 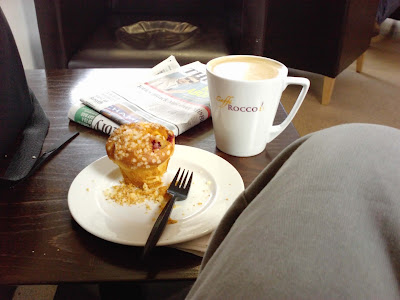 And I thought of the youngster who asked me for help, and who is just about to leave her teenage years behind her. I wonder if the comments of an old man made any sense to her, including my attempt to convince her that the feeling that things could never possibly get better and must inevitably get worse is just one of depression's dirty lies. I probably told her more than I should have about myself in order to try to convince her, but I am hoping that it worked.

So... the clocks have moved forward today and I am sitting in my conservatory at quarter to eight in the evening and it is still moderately light. 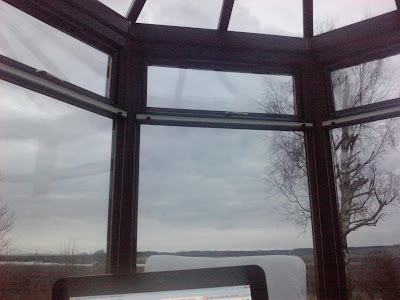